My Trip to Morocco 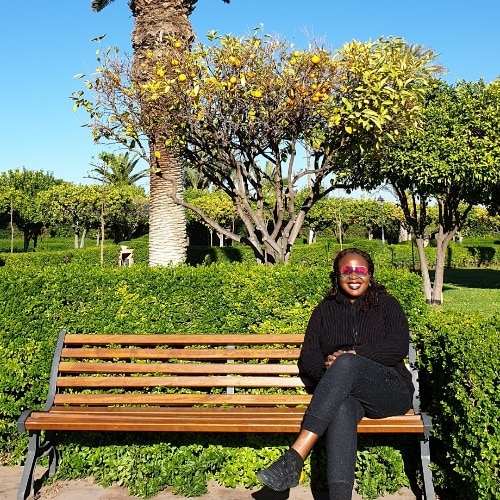 My trip to Casablanca and Marrakesh, Morocco was a study in cultural contrasts. How Mediterranean, Arabian, Berber and African cultures collide and combine is intriguing.

Morocco pretends to be conservative, but at heart, it is very expressive and liberal. The men love women and everyone loves bread. It is not uncommon to find young Moroccans who speak 5 or 6 languages – French, Spanish, Italian, Berber, English and Arabic. My guide, Yahya, was a typical example of a multilingual Moroccan. He runs a Moroccan tour on Trip Advisor.

Yahya welcomed my tour group with a playlist of Nigerian music, then followed up with a mix of local songs for us to sample. He made sure we had local treats and drinks in the car during our two hour ride from Casablanca to Marrakesh. (Because of the layover to catch a connecting flight to Marrakesh from Casablanca, it made more sense to just drive there.)

During the city tour of Casablanca, our tour group was informed, that the word means White House in Spanish. (Marrakesh means Land of God in Berber.) Casablanca is characterised by houses that are predominantly white in colour.

In Casablanca, we did a quick stop at the Marina coastline. It seems to be a popular tourist destination, with many fast food restaurants and delightful views.

We visited the Great Hassan II Mosque. It features the tallest minaret in the world, standing at 210m. It took 10,000 workers, 80 million hours to construct the Mosque.
—

Our first stop in Marrakesh was the Koutoubia Mosque. There we saw the remnants of what used to be a palace, but is now a historical monument. Please visit the public park at Koutoubia. It’s incredibly beautiful and replete with palm trees. It’s against the law to cut one down, anywhere in Morocco. You will earn a month in jail. Marrakesh is a city of many dams because of limited rainfall. There’s a lot of greenery here. There are more plants than buildings!

When we arrived at the 12th century Bab Agnaou Gate (which leads to the old city or Medina), I understood the value of city design. The streets were deliberately made narrow, so they could cast shade on pedestrians during hot weather.

Bread is to Morocco, what rice is to Nigeria. We visited a local bakery in the Medina. The women in the community bring their dough and queue them up to be baked. They say it tastes better than bread baked in electric ovens. I agree. I ate a sample.

I was also introduced to old architecture in the Medina. There was this door with two knockers; one placed higher up than the other. Apparently, the door is a throwback to older times, when men would knock once with the higher knocker and women would knock thrice with the lower one. That way, Muslim women who opened the door would know whether to cover up or not.

The Spice Market in the Medina is a must-see. All sorts of things are sold there – from health remedies and beauty supplements to food seasoning and aphrodisiacs. I tried the spices on some chicken when I returned to Nigeria. It was very pungent and aromatic. A completely different taste from Nigerian food. Quite curious.

I visited antique shops and crafts shops, where I witnessed the process of extracting Argan oil. The oil is not just used to make hair care products. I saw four other derivatives – Honey, Nutella-like Spread, Cosmetics and Salad Oil.

Whenever I visit tourist spots abroad, I’m reminded that Nigeria does not prioritise the cleanliness and beauty of public spaces. In many foreign climes, beauty is elevated, just because. It’s not about whether there’s commercial benefit. It’s about ideals and order.

I did a day trip to Ourika, home of the Atlas Mountains. It’s a stunning countryside with waterfalls and rivers. Prepare to walk across ravines on wooden bridges, Indiana Jones style, to access the outdoor restaurants at Ourika. You literally eat at the edge of waterfalls and rushing rivers. The beauty will overwhelm you.

I need to rave about an experience with technology in Morocco. I wanted to see a Physiotherapist, while in Marrakech. I found one on Google Search and used Google Maps to get there. When I arrived, I realised the Physio was blind and only spoke French! We conducted an entire consultation using audio Google Translate. The role of technology in business and tourism cannot be overestimated. Modern tourists rely on Google. Sometimes, it’s as simple as getting the movie playing times for the cinemas near you or the public transportation schedule.

A great place to stay in Marrakesh, is at Gueliz, near the Carré Eden Shopping Center. Make sure you try the sea food and four-layer smoothie at the outdoor restaurant at Almas Hotel, which is walking distance from the shopping centre. It’s about two streets away. Food is cheap in Morocco, because they produce their own food – from Salmon to Wheat to Fruits.

Some of the taxi drivers adopt a “pay what you like” policy. So, it’s good to have a sense of what the taxi fare is from place to place, so you can pay what’s fair.

If you have some money to splurge, check out the spa at Beldi Country Club. It’s about 20 minutes from the Marrakesh city centre. I did a traditional hammam scrub and massage. A word about the massage. Hardly any pressure is used. So, it’s more soothing than muscle relaxing.

The final highlight of my Morocco trip was a visit to the market square, Jemaa el-Fna. There, you navigate your way around bicycles & motorbikes as well as cart pushing donkeys and horses. I enjoyed every minute of it!

I shared my travel photos from Morocco here. Do check them out.

Morocco pretends to be conservative, but at heart, it is very expressive and liberal. Click To Tweet