I will begin this blog by stating the obvious: The UK and US aren’t like what many people think. As tourist destinations and lands of opportunity, many countries outclass them, by far. However, knowing this didn’t dissuade me from visiting these countries and sure as hell won’t dissuade anyone else either. So, I shall attempt to provide the would-be traveler with a few subjective insights.

I have found that the formula for surviving/enjoying a trip to any developed city is pretty much the same.

First ACCOMODATION…(this does not apply to you if you’re staying with family or friends though). Before you go, do a search online or ask around for the major shopping district or city centre. Usually, there’is a street or region that captures the city’s sights and sounds. For example, Oxford Steet in London or 5th Avenue in New York. It will be expensive to stay in the actual area, but the trick is to look for a hotel just “off” the street – say 5 to 10 minutes walk from the centre. That way, you’re not only safely inured from the hustle and bustle, but you save hundreds of dollars on hotel expenses. You’re also minutes away from shopping, the cinema, the spa, eateries, tourist attractions, train station…everything! Finding the ideal hotel location is absolutely key when you go on vacation. I always look for a hotel close to a cinema and Borders or Barnes & Nobles. Yes, am a book worm and love coffee.

Now, COMMUNICATION. For business travelers, you may find it useful to roam your country phone while having another handy for a local sim card. Buy a sim card and top up on credits at the airport when you arrive. Be sure to read the fine print and ask for special offers, which operators can SMS seamlessly with your country’s networks etc. If you plan to visit the country frequently, it may be cheaper to simply get a contract line or bundled minutes using your host’s contact details on the registration form (with his consent, of course).

As per MOBILITY, there are some cities that have great public transportation networks e.g Singapore and London. Go to a train station and buy a pay-as-you-go card or travel card. It works on both trains and buses and saves you from having to count out the exact change for every trip. If you’re going to be all over the place within a few days then a “fixed period travel card” is a better option, but if you’re not sure how often you’ll be on the road or you plan to revisit the city, the pay-as-you-go card is a safer bet. You can top it up when needed and use it for years.

On your first day in a new city, it may be nice to do a guided city tour just to get a feel of the city before striking off on your own. There are many guided tours available online or through your hotel. During the tourist season, book a few days in advance for the most popular tours. 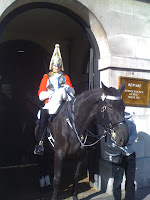 London reminds me of Singapore with a multitude of bicycles! It makes sense when you remember that Singapore was a British Colony. The architecture and feel’s the same. You can also stroll to most places as every where’s connected! To my amazement, the people really love to eat…and eat…standing up, walking, in the park, leaning against the wall…This is truly the city of sandwiches. And yet everyone seems so trim. Maybe because they walk about so much. I love pie so I proceeded to sample a different type each morning at the nearest café. Also, try to sample gourmet pizza at a Pizza Express. I attended a Brand Conference while in London (where I was the only black participant). One of the speakers from Pizza Express so extolled the virtues of their gastronomic delights that I just had to taste one. I wasn’t disappointed! There’s one at Dean Street, just off Oxford Street ( by Oxford Circus Station). When I travel, I never have issues with food. I love rice based dishes and anything crusty so can do Italian (pizza and pasta), as well as chinese and thai (rice, chicken). I always find stuff to eat. Tap water is safe to drink in the UK, but I noticed that when I ask for tap water with my meal at a restaurant…I get a side glance that says…”you cheapskate, you can’t order spring water”? For where? Asko!

For bar hoppers, The Slug & Lettuce isn’t a bad place to visit. Kinda reminds me of News Café. There’s one not too far from Bank Station. For clubbers, try Abacus or Revolution in the same area. At the train station, everyone rushes to the train platform…why I don’t know, as there’s a train about every 5 minutes…so what’s the rush? The cold? The truth is, it’s hard to truly destresss in a modern city. ‘Tis better to retire to a lake in Italy or a farm in Texas.

Like in all good cities, there are directional signs everywhere and many things are automated, though you may ask for help. Many service positions are manned by the young, friendly and earnest and they’re usually up-to-date and competent. 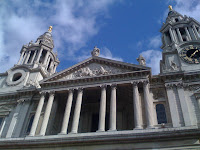 The Monuments are a bit disappointing…apparently pictures do better justice than the real thing. At the Tower of London, I took one look at the “family jewels” and thought…”is this it?” By the way, I will never do the London Eye again. Perhaps, it’s an activity for photographers, as it’s incredibly slow and boring and I don’t give a flying fig about a “panoramic view of the city”. Madam Tussaud’s was worth it though. You really can’t tell who’s real and who’s not in the dim lightingJ.

I came across some intriguing business names in London – Jupiter (a financial services firm with the payoff: We are on this planet to perform!), The Couch Bar, Eat..the real food company, St. Mary’s Axe.

Another point to note – excellence and good taste have no geographical demarcation. Good taste traverses cultural barriers…a point I’ll speak more on when I get to my US observations.

The UK and US are cities of offers. Everywhere you go, you’re asked to buy 2 for the price of 1.5 or a bigger size to save money. At a time, I felt like shouting: “It’s my money! I don’t want two…just one and I don’t mind paying for it”! 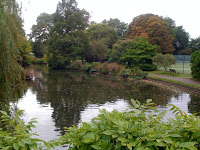 Suffice to say, I did the whole tourist thing in London which I won’t bore you with. Unfortunately, I didn’t do much shopping (I did that in the US) so I can’t comment much on that. From London, I took a train to Bradford to visit my sister who’s studying there. Bradford is an old sleepy erstwhile industrial town. It’s quite peaceful and basically a university town now. I also visited Saltaire in West Yorskshire (Aire: River, so…Salt River). It’s a UN Heritage site built by a miller who used the river as a source of hydro-electric power. He sorta reminded me of Hershey and Heinz: 2 great socially responsible entrepreneurs. Now, I’m going to be impolitic by mentioning that Bradford is also cheekily known as the Islamic Community of Bradford or Bradistan because of the large Middle Eastern Population. If that is so, then perhaps Peckham should be known as Naijaland!

I like the British. They exude a sense of responsibility, politeness, order and quiet efficiency. They mind their business, but are very helpful and do so with a smile. They do unglamorous jobs with thoughtfulness and efficiency. And the city reflects this thoughtfulness…sidewalks with wheelchair access, public toilets everywhere, directional signs, public transportation. Parking space is still an issue and there are congestion charges in the West End.

In summary, London is an okay place to visit ENROUTE some place else…it’s not a place to stay. Perhaps if I had visited more cultural sites like Stonehenge, I may have had a richer experience.